LAUREATE'S COMMENTS
ON THE PRESENTATION OF THE 2009 PRINCE CLAUS AWARDS AT THE DUTCH EMBASSY. VICTORIA ISLAND, LAGOS, NIGERIA.

One of the key criteria used in selecting awardees by the Prince Claus Fund for Culture and Development, is that a laureate's work should have a positive effect in a wider cultural and social context. I am, therefore, honoured and gratified by this award and the recognition it confers on my work. I suppose awards are to be esteemed not only for what they represent, but also for what they do. Awards or prizes, for instance, aid in marketing an artist's work, as they act as a catalyst to public recognition or serve as seals of approval. When the African-American writer, Alice Walker, published The Color Purple and it was catapulted to best-sellerdom by The Pulitzer Prize, it made her to replace Shakespeare on many American 'campuses in the 1990s as obligation literature.

While prizes are laudable, in themselves they do not alter the course of global aesthetics as Picasso or Van Gogh did. For some art prizes serve as public events; while others, and I believe this is true of The Prince Claus Award, help to create a' new kind of public space. This award: because of its overriding concern for concepts and activities relevant to culture, development and environmental issues, brings to the fore people who desire to communicate with and engage the broadest possible public

Art is about originality, pointing toward new futures - never inward-Iooking, complacent or conservative. Creativity is the joining of man and material. The bark of the papyrus became a new life-form when the ancient Egyptians transformed it into paper before then; writing was done on clay tablets. The artist must thus look to his environment, the natural and the manmade, as sources of inspiration and material.

The fact that a particular material or object began its existence as one thing and then reincarnated into another, demonstrates the cycle of life's continuum: birth, death and rebirth. Almost all religions adhere to the belief that nothing truly "dies"; but transforms anew to life in other forms' and worlds. Reincarnation is therefore a necessity of and for all entities, animate or inanimate. Recycling or reincarnating in art practice is art imitating nature, and has less to do with "poverty" and "Third World need" them the existence of a plethora of choices with which to experiment. What emerges are works of art, which may be evocative, even arresting, but originate or relate primarily to items which seemed gritty and marginalized, what, some may relegate to waste or trash. Clearly, the richness of our environment constantly reminds us of numerous alternatives, which challenge us to see, rather than look, think, rather than presume, and thus act creatively to connect with our public. I believe The Prince Claus Award underscores these concerns and more.

Thank you.
EI Anatsui
Professor of Sculpture, University of Nigeria, Nsukka 18 December 2009
Posted by Bruce Onobrakpeya Foundation at 11:18 AM 1 comment: 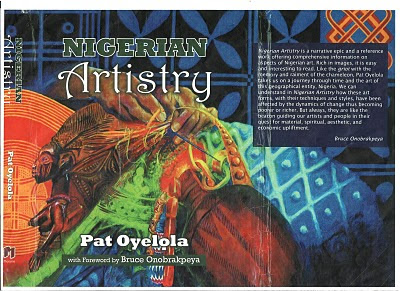