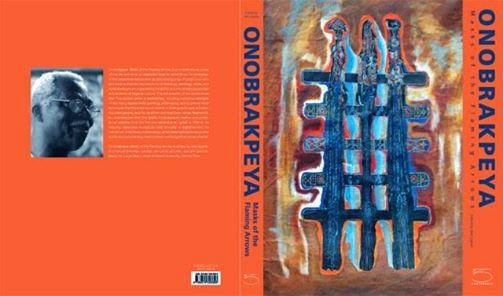 The above book is made up of 5 main parts: the preliminaries, texts, personal notes, testimonies and curriculum vitae. The preliminaries contain the table of contents, foreword, preface, acknowledgements and artist's notes. The texts contain 11 articles sourced mostly from art scholars, while personal notes cover Bruce Onobrakpeya's comments on his art works. There are also testimonies from notable people and print media within and outside Africa. The curriculum vitae accommodate the life and professional experiences of Dr. Bruce Onobrakpeya.
I will here address all the above one by one, starting with the foreword.
The foreword, written by the President of Nigeria, Goodluck Ebele Jonathan, expresses his joy in writing a foreword to a book that appropriately covers Bruce Onobrakpeya's entire experimental and innovative art and his glutinous contribution not only to modern art development but also to nation building. The President recommends the book to all art practitioners and those interested in modern Nigerian art. In the acknowledgements, Dele Jegede necessarily appreciates the efforts of all those who have contributed to the book. He has a very brief nostalgic reflection on Onobrakpeya's art development and mentions how the essays in this book emerged; before addressing the contextual compartmentalization of the book. Having examined the preliminary part of the book, it is necessary to frontally and very atmospherically review all the essays, as objectively as possible.
Dele Jegede’s "Ruminations on Onobrakpeya Bruce Onobrakpeya: The Legacy", an introduction, refuses to indulge in any art historical rehearsals that are already commonly domesticated literatures on Bruce Onobrakpeya. He, therefore, focuses on the soul and not the body of the artist's career. He begins with patronage which he sees as the authoritative determinant of an artist's success, creative prosperity, artistic continuity and cultural preservation. He frowns on some actions that are septic to art patronage in Nigeria and, also, reveals some anti-depressing antidotes that have been provided by some artistically possessed people, like Rasheed Gbadamosi. He believes that, as already symbolized by Bruce Onobrakpeya, art patronage can bring professional jubilation, aggressive experimentation and unclogged creative development in Nigeria. Jegede addresses the Zaria story, but as promised, in a way that does not help fertilize the historical boredom that has put the Zaria discussion under stress.
He silently, but pinchingly, berates the rather scratching art historical attitude that de-energizes the manifestly ideological or philosophical, political, nationalistic as well as culturistic positions of the Zaria Art Society; of which, very imlpyingly, Dr. Bruce Onobrakpeya was a dynamically visible part.  Jegede points out how the radical art commune of Zaria gave Bruce the initial anointed weapons to challenge, like other Zarianists, the imperialistic effusions of his period, thereby clearing his path to creative and ideological radicalism. Jegede's "Onobrakpeya's Ascendency" is not only a cherishing metaphor for the entry of Jesus into Jerusalem, it also reveals those things that have given Bruce Onobrakpeya a golden and superior scepter of art image in Nigeria. These are sympathetic and engaging humility, undaunted ability to recognize early, in the spirit of Zarianism, his innate, and traditionally cultured creative potential that snubbed Occidental art mode.
Jegede explains how Onobrakpeya, being a fanatically committed artist, has modernized the culture of art professionalization or devotion to studio practice; thereby giving pride and dignity to art and artists. He also acknowledges Onobrakpeya's Urhobo subject matters and his greatly historical and artistic triumph over religious ignorance during the visual art controversy between him and the Catholic Church. Jegede also sees Ibadan as the Mecca and Jerusalem where Bruce Onobrakpeya received the search light for his unassailable creative development. In conclusion, he confirms Onobrakpeya's creative dominance, unmatched experimentation, mythical creativity, foresight, among others that make the artist an innovator, documentator, ideologist, critic and preserver of culture.
David Okpako' s "Accessing Culture Through Art: Bruce Onobrakpeya in Urhobo Myths" corroborates the fact that Onobrakpeya is a man of many creative parts. He discusses his artistic indigenization with utmost loyalty to his Urhobo culture which gives Onobrakpeya's art venerative or mythical subject matters. Okpako gives some of the artist's works detailed iconographic interpretations, while he also exposes the anthropological ingredients of his art works generally.
"Bruce Onobrakpeya's Art: An Analytical Approach to the Configuration of Form" by Frank Ugiomoh distils Onobrakpeya's convulsive obsession for new ideas and, therefore, new forms. After some synthetic and affiliative historical references and overview review of Dr. Onobrakpeya's works, Ugiomoh takes a well guided trip to analyse or exteriorise the artist's multi-lingual, if not encyclopedic, formal language. Ugiomoh does not, however, forget to occasionally reveal the politically unpretentious conceptual intentions of some works.Definitely, Ugiomoh's formal analysis has exposed the grace and honour that are the loud attributes of Onobrakpeya' s art. He concludes that, the art works of Bruce are, generally, an encyclopedia of uniquely reformed styles that cut across visual history.
Olakunle Filani' s "The Visual Translation of Urhobo Myths, Legends, and Philosophies in Bruce Onobrakpeya Prints" briefly vaporizes Onobrakpeya's art for wider historical knowledge. He addresses the factors that initially induced his interest in his Urhobo culture. Filani piercingly scans those visual elements that make Onobrakpeya's works, including prints, uniquely Onobrakpeyaic; stylistically, culturally, historically and philosophically. John- Tokpabere Agberia's contribution, "Shifting Space, Reordering Art: The Harmattan Workshops of Bruce Onobrakpeya as Interventionist in Modern Nigerian Art", starts with the examination of the historical foundation of art workshops in Nigeria. It examines how artists, generally, are not geographically sedentary in their professionality; which is why Bruce Onobrakpeya's Harrnattan has not less than 5 creative and intellectually telling and universalistic objectives.
He focuses a powerful searchlight on Onobrakpeya's momentous, foreordaining and richly instrumental art career. He gives him a high distinction for his Aghara-Otor Harmattan Workshops not only for its salient externalization of Urhobo culture but also, very essentially, for its unsurpassed creative moralizing professional mentoring and professionalizing contributions to modern African art.