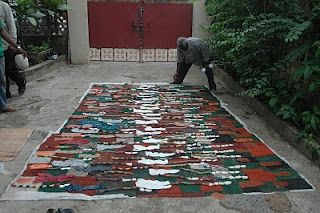 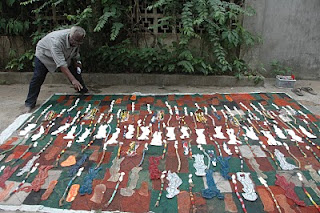 Posted by Bruce Onobrakpeya Foundation at 2:07 AM No comments:

Recently in Ado Ekiti, the capital city of Ekiti State, was the exhibition Ekiti Kete: People and Places. An exhibiting of paintings and photography showcasing the cultural affinity and tourism potential of Ekiti State.

The exhibition which ran from April 28, lasted till May 10, 2010. The exhibition took pace at the reception area of the governor’s office in Ado Ekiti. The exhibition highlighted over 30 experimental works done by New York based Ekiti indigene Olusegun Fayemi.

Fayemi in the last 30 years has focused his energy, on his work as a documentary photographer traveling widely internationally, lecturing and sharing through several of his award winning photography books, images that seek to capture and celebrate Africans in a positive light.

The themes captured in this exhibition spread through the entire gamut of traditional practices, historical landmarks and people, folk and cultural practices

2 works on exhibit, that were of particular interest was that of a black and white work which was a monochrome pigment print on paper. The picture shows the pose of a titled older man, possibly a chief or bale, rendered majestically in a long flowing robe called agbada in western Nigeria. The robe is hand woven and done in the traditional hand made Aso-Oke, a craft native to the Ekiti people and the rest of Yoruba land. The gentleman is sited and can be seen wearing a traditional beaded crown with matching ornamented shoe, depicting royalty. He is also holding a decorated scepter or staff adorned with colorful beads and fly wisk, both indicative of class status or power and authority over a people.

The man who is also royalty and king, in this black and white picture beckons through his highly decorated regalia, the viewer to behold the majesty of Ekitiland. This piece represents a prayer for the preservation of the grandeur of the obaship or other positions of traditional influence and institutions in Ekiti land

The second is the Ikogosi waterfall, another pigment print, done in mild hues of colors. Here we see an attempt by the artist to give us an inner glimpse of the exhilarating pulsation of the victorious water falls of Ikogosi, considered by many, as the pride of all in Ekitiland. The picture represents a metaphor of the undwindling, inimitable, and God given strength, vigour and stamina of the people of Ekitiland.The water fall also speaks of the fervent prayers of the people of Ekiti land to provide leadership in the areas of culture, education, agriculture and industry. A prayer consistent with the aspirations of many parts of Nigeria.

Fayemi’s works given the experimental range of media used, places him in a class of his own among artists who use the photographic medium. He is however part of the elite corp of very passionate Nigerian photographers like Don Baber, Pa Ojekere, Sunmi Smart Cole and Tam Fiofori whose works seek to redress the image of the Nigerian and by extension the African, as a largely disconnected, exotic, and often time, victim, and a creature of the circumstances he finds himself. Fayemi’s images in Ekiti Kete presents with such freshness the image of the African as very much connected with the larger scheme of things, whether spiritual or physical and ultimately, indeed very much a shaper of his of his or her own destiny. We see through Fayemi’s lenses the faces of victorious Africans who are ready to assert and hold their own in today’s world, in a most befitting and dignifying way.

Fayemi’s exhibition titled Ekiti Kete was clearly a joy to behold. The exhibition establishes his mastery of multiple experimental media in photography. It also gives him great credit as a documentary photographer in search of Community, however defined. This exhibition which is the first of its kind in Ekiti land suggests that the people of Ekiti State have such a rich repertoire of artistry and culture, and are willing to share this with the larger world. Every part of Nigeria can take a cue from this.
Posted by Bruce Onobrakpeya Foundation at 4:19 AM No comments: 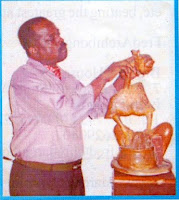 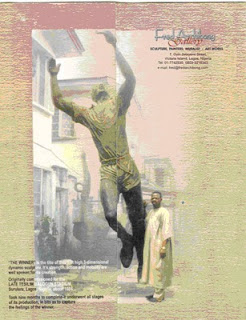 
Young Fred went to school at the prestigious Federal Government College, Warri in present day Delta State of Nigeria, in the late 70’s. He easily excelled in the Fine Arts. In fact it is on record that in his graduation year from high school, he won most of the prizes available at the secondary school level, in fine art, in the then Mid-Western region of Nigeria.
He later left for Chicago in the U.S., where for a short while, he studied dance and choreography, before proceeding to the Chicago School of Fine Art to study Fine Art, where he specialized in sculpture.

On his return to Nigeria, in 1988, Fred dived neck deep into the very turbulent professional life, of being a full time practicing Studio artist in Lagos. In this regard Fred was a pace setter, as there were very few, full time artists working in Lagos or anywhere in West Africa at that time.

Fred is easily remembered for his monumental sculptural pieces which were executed in cement or fiber glass in his Bode Thomas studio in Suru-Lere, Lagos. His teeming number of apprentices made it possible for him to execute his art works and commissions very fast, and this partially accounted for his popularity, which soon soared. His earliest collectors included Fred Agbeyegbe and Chris Ogunbanjo who gave him very early exposure in his career. However, by far, the single most decisive patron who gave him impetus, in his early years, was the architect Fola Alade, who gave him great visibility and artistic milage, by commissioning him, to do a lot of frescoes and outdoor relief works of art, which soon became the hallmark of his trade as an artist.

Some of his works could be found at the Nigerian Security and Printing Company and Nicon Insurance House in Abuja, Nigeria. Fred was clearly an artists’ artists and developed extensive networks in government and artist groups like the Society of Nigerian artists, where he had as many admirers as he had foes.

He was not an exhibiting artist, however he was part of the hugely successful Common wealth Heads of Government Summit (CHOGM) Exhibition titled "Celebrate Nigeria" in Abuja, Nigeria in 2003, that had such names like Bruce Onobrakpeya, Bisi Fakeye and Nkechi Nwosu Igbo showing side by side with him. This show was seen by over 10,000 people and had Her Majesty the Queen of England in attendance.

Fred as he was often called, will best be remembered as an artist, who struggled very hard to integrate tourism with arts and culture for over three decades. To his credit is a tourism company which he founded, BHS, which was geared at not only creating hundreds of jobs for Nigerians in the area of tourism, but showcasing Nigeria as a world-class tourism center and preferred destination point. A hard sell even today.

Fred's company also led a consortium of investors and facilities managers, to acquire a 30 year lease to manage the Tafawa Balewa Square (TBS) facility, a multi-million Naira facility, in Lagos, Nigeria. This was no mean achievement by any standard, as it required cutting through red tape, tremendous financial, mental and physical exertion to consummate. This singular project, which he sought to execute, remains the greatest testimony, to this man's indomitable and outstanding artistic vision, industry, passion and drive.

After life's fitfull fever, Fred Archibong sleeps well. He passed on at the tender age of fifty. He will be greatly missed by the Otu-Ewena group of Artists. A group founded by Bruce Onobrakpeya, which acknowledged the inter connectivity between art, architecture and the beauty of the environment.
Posted by Bruce Onobrakpeya Foundation at 9:35 AM 1 comment:

Jewels of the Harmattan Workshop Experience 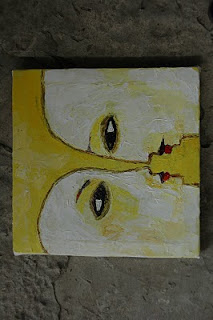 The Bruce Onobrakpeya Foundation will be delighted at your esteemed presence
as you honour us at a Group Exhibition of Paintings, Multi-Media Paintings and sculptures

This exhibition showcases over a decade of works produced by participants in the Harmattan Workshop Experience and is a special exhibition to celebrate the Golden Jubilee anniversary of Nigerian Independence, exhibiting the wide range of the work by artists who have participated in the Harmattan Workshop. These include artists such as Bruce Onobrakpeya, Sam Ovraiti, Tam Fiofori, Ndidi Dike, Lara Ige Jacks, Duke Asidere, Oladapo Afolayan, Tola Wewe, Jerry Buhari, Midy and many more 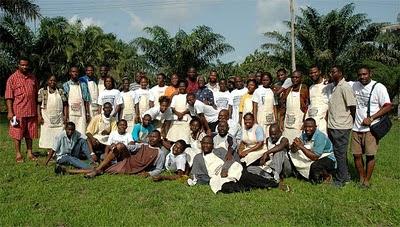 Are You an Artist?
Then, the Bruce Onobrakpeya Foundation will help you escape the distraction of the city and enjoy serene and rustic Agbarha-Otor, in Delta State, Nigeria, to create the art you have always wanted.

Accommodation and studio space are provided for the 2 weeks where you can work independently or alongside other artists according to your wish.

This session is for artists who wish to develop their own inspirations, without any supervision as was in the three previous sessions. They can work on their own or in concert with other persons if they so wish. The serene environment of the workshop provides an excellent ambience for serious creativity. They will be provided accommodation, studio space and free use of equipment, provided they know how to use and handle them.

They are required to bring along their own palette knives, brushes colours, canvas, etching plates, wood, gloves, nose masks, paper etc. Stone carvers and ceramists among them are free to draw from the stock of stones and unprepared clay available at the premises. No corrosive substances of any description are allowed to be brought in .

Participants are required to donate one of the works they produce to the Foundation
Venue: Niger Delta Art and Cultural Centre (Harmattan Workshop Venue), Agbarha-Otor Delta State.

MEALS AT THE HARMATTAN WORKSHOP

Breakfast, Lunch and Dinner is available at the workshop cafeteria at an affordable price of N250.00 per plate. However, participants are free to buy extra plates as need be. There are shops in the town and at the vicinity of the workshop where participants could purchase toiletries and other consumables if needed.

Participants are allocated rooms at the Harmattan Workshop Cabins. Depending on the number of participants for each session and space in the room, participants are paired either two or three in a room. However we occasionally must assign other accommodation to address this issue. Rate includes housing.

*Alternative housing plans could be made by participants who wish to stay outside the workshop complex.
Posted by Bruce Onobrakpeya Foundation at 6:46 AM No comments: 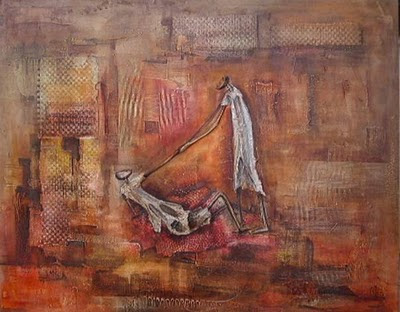 BY YVES MIDAHUEN (Midy): An Emerging International Artist and Harmattan Workshop artist based in Cotonou, Republic of Benin, West Africa