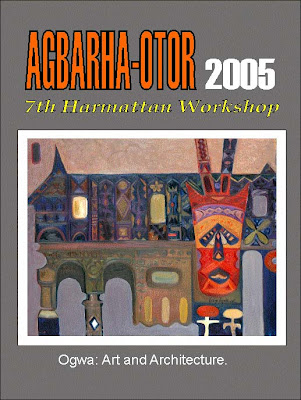 The book Agbarha-Otor 2005, edited by John Agberia and Pat Oyelola, is a documentation of lectures, seminars, artworks, and other noteworthy activities that emerged from the 7th Harmattan workshop held between February 24 and March 23, 2005, at Agbarha-Otor in Delta State, Nigeria. Primarily, it is an exhibition catalogue of all the artworks produced in the various sections of the workshop. The exhibition of artworks takes place in the same year usually towards the end of the year.
Book will be formally Launched on 2nd Oct. 2010 at the Harmattan Gallery.
Posted by Bruce Onobrakpeya Foundation at 8:03 AM 1 comment:

Birthday of the Month of August 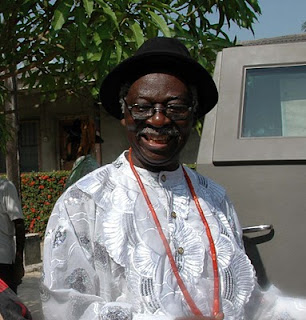 Bruce Onobrakpeya is one of Africa’s best known and most highly respected artists. A Nigerian Urhobo printmaker, painter and sculptor, he has been described as a “living legend” who was ‘responsible for the renaissance in contemporary art in Nigeria’. He is acknowledged as being one of the leading print-makers in the world and credited with significant advances in printmaking techniques. In the early 1960s, he was a leading member of the ‘Zaria Revolutionaries’ who changed the course of art from a reliance on European concepts and practice towards a distinct African aesthetic. The fusion of his training in western techniques and his own heritage and creativity, produced an exciting new art which expresses the vitality of Africa’s great traditions in a modern style for the contemporary world. He also helped to establish the Society of Nigerian Artists in 1964.
Bruce Onobrakpeya was born in Agbarha-Otor, in the Ughelli Local Government area of Delta State, Nigeria in 1932. He studied Fine art at the Nigerian College of arts, Science and technology, Zaria (now Ahmadu Bello University), and graduated in 1961. He taught art at the old western Boys’ High School, Benin City, his alma mater, Ondo Boys High School, Ondo and St. Gregory’s College, Lagos, at various times between 1953 and 1980, where he nurtured successive generations of art students, some of whom have themselves grown to become famous names in the field. He has worked as a guest teacher and artist in residence in Europe and U.S.A., and has participated in over 100 exhibitions in Nigeria and around the world. Bruce Onobrakpeya’s works are in many international collections, including the Vatican Museum in Rome, the National Museum for African Art, Smithsonian Institute, Washington D.C., and the Museum of African and African American Art and antiques, New York. His art is also represented in the collection of her Majesty Queen Elizabeth the 11, Head of the commonwealth, and in the collection of various statesman and celebrities around the world.
His public commissions range from murals for the Nigerian independence Exhibition pavilion (1960) and the Idi-Araba site of the university of Lagos, now College of medicine (1963) to a design of 1/6d Nigerian postage stamp in 1970 and glass etched panels for the Murtala Mohammed International Airport, Lagos.
Bruce Onobrakpeya is developing an international art centre that will include folk museum of art, as well as a gallery of Contemporary African art in Agbarha-Otor, delta state. The centre has hosted the Annual Harmattan Workshop Series for visual artists since inception in 1998, this centre was initiated and sponsored by Bruce with support from corporate organizations. It was created with a vision to provide opportunities for artists to come together to experiment, share ideas and carry out research, the workshop which is also one of the longest running in Africa, has gained international recognition and is the only such forum for artists in Nigeria, where artists of all backgrounds come together for up to 6 weeks to engage in artistic and academic projects.
Bruce Onobrakpeya has received numerous prizes and awards, including the British Council Award (1969); the Pope Paul V1 Gold Medal for participating in an exhibition to commemorate the Pope’s 80th birthday celebrations (1977); the Full-Bright-Hays Award (1979), the Solidra Circle Award (1985); an honorary degree of Doctor of Letters from the University of Ibadan (1989); Fellowship of Nigerian Artist (1989); Member of the Federal Republic (MFR) National Merit Award (2002) and Living Human Treasure Award (2006) by UNESCO and the Federal Government of Nigeria.
Posted by Bruce Onobrakpeya Foundation at 9:41 AM 5 comments: